Marc’s Musings: What’s in a photo

Whilst we are unable to travel just yet due to the global Pandemic, we reflect back on past travel and trips that really stood out or meant a lot. In 2004, Dr Marc Shaw went with World Vision to Zambia. Upon return, he reflected back on the journey and his photos. 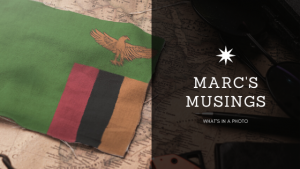 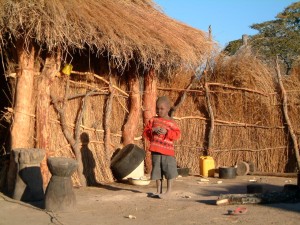 Late last year I went to a World Vision sponsored village in Zambia. After spending five days in Livingstone, Victoria Falls, I was glad to get out of the tourist ‘thing’ and get into some honesty. Seems hard to say now, as I look back at the occasion, but reflection gives a broader meaning to life and a chance to look into a mirror; get a look at one’s self.

This photo meant much to me, still does actually. I was with my hosts doing the rounds of a village called Siachitema in the south west of the country, at day’s end. Tiring yet stimulating day, and I had spent it with rather wonderful folk who had taken us to see the things we were supposed to see; you know, buildings dedicated by some charitable organisation, stuff like that. Villagers were very proud of this, but it’s the sort of stuff that we hear about all the time, ‘cos we have TV and other forms of media! Mind goes blank in those situations, not through the honesty of the occasion but because western culture is saturated with outcries of ‘you better eat this; remember the starving kids in Africa’! Wrenches one’s heart, but what can you do? So I paused and carved out a bit of space in my mind to enjoy the scenery and drink in the colours and images as we drove home in our air-conditioned 4×4. We humped and bumped along the roads and through the trees and then there was this marvellous vision of a cluster of buildings covered in the lights of a setting sun.

It was the home of the local policeman. Stop the truck, say hello, ask to take photos and walk around. Joseph looked at me as I approached him, his elder sister and his much older brother darted off in laughter, keen to get away from the ‘old man with the white beard’. Joseph just looked. He held his position. He didn’t smile even though I tried to get him so to do. He just rubbed his left foot over his right and moved his fingers gently, each between the others, without purpose. His eyes held mine and he held a charm for me; his baggy raggedy pants and dust covered face beguiling me. I looked around his home with the pots and the stools and I wondered if I could live as he did. Well, we all wonder that when we travel to such situations, I know, but I just wondered if I could. What would it take to live there, remote and away from the comforts of my familiars; loudness, electronics that I simply couldn’t do without, and a glass of wine that lures me into thinking ‘sophistication’.

When I got too close Joseph darted away to hide amongst mother’s dress, only to peak out of it when he was secure. What did he have to look forward to that night; some rice or perhaps some manioc, maybe a little protein or even some fruit, cup of water; that’s it. Not much really, yet he grows up on this day after day as tourists pass by his village and don’t even know he’s there; this bundle of human energy.

When such tourists go into new locations how often do they think of their effect upon the local populace I wonder. I fear not often for too many are trying to adjust to their own demons as they travel; the rubbish on the streets, the footprint loos, the stress of group travel. They don’t have time to delve into the truth of the country they travel in, they’re usually not there much longer than a series of photo shots, a beer after a hard day’s sightseeing and a couple of souvenirs or postcards.

The modern lifestyle that we live in demands quick travel and a package tour, and there is now huge growth in this travel trade. There is a ‘been there, seen that’ mentality that has been fed to those that just want to ‘skim the surface’ of a new country, without putting too much effort into it; no need, not there long enough! Occasionally however, tourists have time to stop, pause, look around and be travellers. They get to smell the smells, hear the laughs and watch the passions; in some very small way an understanding and communication is implied and inferred.

In their journeys to places new, old, familiar and strange, travellers are best appreciated when they care for each separate environment they experience. They may be passing through, yet others live there all their lives; they drink the water, they eat the food and they live, love and die there. Travellers in their flash gear, fashion clothes and ‘novel marked’ tattoos are best appreciated in a region new to them when they approach it with softness and humility. When they talk in tones less than those of the locals and when they don’t overindulge in anything; sex, alcohol, drugs or overstaying their welcome.

For their part the travellers that pre-plan a journey and care for themselves without local burden or fuss, gain respect and usually a valuable experience. There is ‘something’ about a ‘footprints toilet’ that is physiological comfortable, for that is why locals may use it. There is something about hot and spicy food as a diet, for it aids in the cleansing of food about to be eaten. Finally, there is definitely something about drinking bottled water, for boiling it may take much of the available energy away.

The tourist that can honestly appreciate these rules in travelling become worthy travellers. I also hope that one day I may truthfully say that I fully understand and live by them when I travel; I fully haven’t yet… but that is my wish, for then I will feel an inner comfort in the life that Joseph leads, and better still I shall probably understand it.

NEXT Marc’s Musings: So, to the future…