Join Worldwise Medical Director Professor Marc Shaw and his good mate Paul Winter as they embark on a trip of a lifetime to the exhilarating cities and challenging terrain of the Great Ganges River!

My interest in Great Rivers of the Globe began when I was invited to be the doctor for an expedition to the Amazon River in 2001. Sir Peter Blake was a New Zealand hero and he was going into the region to reflect on the many issues of pollution and ‘tree and bush burn-off’ that were foremost in the media, at the time.

Whilst Blake’s main interest was the global oceans, mine had been rather focused somewhat by a comment made by Jacques Cousteau (the French explorer and conservationist)

‘In the past 32 years, we have made 52 explorations. It is clear to us that the provinces of the sea, the coastal waters, are directly affected by running water of telluric origin. We found that the freshwater arteries of the land were playing a crucial role in the health of the sea, washing industrial and human pollutants into the ocean, the ultimate sewage receptacle. Rivers that used to fertilise the sea with salts and nutrients, like the breasts of Mother Earth, were turning into kidneys soiling the sea with toxic matter’

Travelling along the Amazonas river tributaries was a revelation to me and I really craved for more. Having been back there 4 times, I began to reflect on a desire to travel along other river systems of our world. 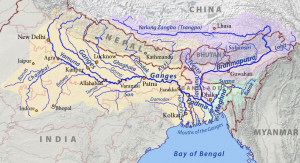 And so, to the River Ganges, in India. Ganga Ma is perhaps the holiest river in any religion. Though it is also likely one of the most polluted rivers in the world, the Ganges is of immense spiritual significance to Hindus. 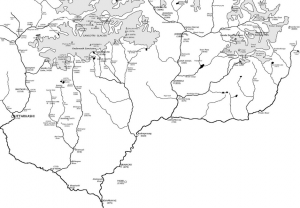 Originating from the Gangotri glacier at Gaumukh in the Indian Himalayas at about 4,000 meters above sea level, the river flows 2,525 km across northern India before meeting Sagar Island, at the Bay of Bengal in East India and Bangladesh.

Ganga Ma is considered to be a goddess by Hindus and indeed has had this reinforced by becoming the first non-human entity in India to be granted the same legal rights as a human being.

The mythology of the creation of the Ganges gives emphasis to this: sixty thousand sons of King Sagar inadvertently angered the hermit Kapil Muni whilst he was meditating by the sea at the tip of Sagar Island, at the delta of the great river. So, he shrivelled them into ashes. As you do! It was Sagar’s grandson Bhagirath who asked the gods to send down the goddess Ganga to restore them to life. Ganga came to earth in the locks of Shiva’s hair at Gangotri and then Bhagirath led Ganga down out of the mountains, across the plains to the sea, looking for the huge pile of ashes. They found them at Sagar. Ganga washed over them and the souls of 60,000 sons were liberated.

After four years of planning, Friend Paul and I had left our wives looking euphoric that we had finally embarked on our oft-debated journey, ‘twas a drizzling Hamilton, New Zealand Sunday morning. Kisses and waves and hugs: ‘the boys are finally away’! 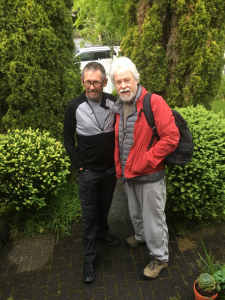 I remain uncertain to this day however whether my beloved said ‘Praise them Lord’ or ‘Thank you Lord’.

A sleepless night’s flight from Singapore to arrive on a murky 6 am morning, Delhi; the Capital of India.  A pale hue is struggling to filter through the fog of the city. At least that is the comment made when I asked why it was so smoky.

The relative calm of the airport, reinforced by the slow passage through customs, is traumatized once through the public gates and into the noise of daily living. ‘What do you want’, ‘You want a taxi’, ‘I’ll take your luggage’ [meaning I’ll TAKE your luggage!), ‘You want something: hotel, tuk-tuk, hash’. We were now vulnerable and fully ‘up for grabs’ to all takers. Didn’t help that Paul lost his passport for a couple of hours, adding to the stress. The fact that it was found in my luggage later in the day, is something we still look at each other suspiciously about. 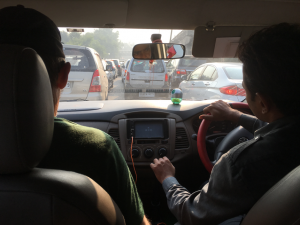 Taxi. Hotel. Finally, we are here on Marc and Paul’s ‘Most Wonderful Trip to Ganga Ma and India’. Well! Honking horns (‘toot-toots’, ‘parp-honks’ and variations of all these sounds in between), gazillions of smiling teeth, AND ‘curry’ welcome us to India.

One small problem: I hate curry.

Stay tuned for stage 2 of the journey posted next Friday.

NEXT Contemplating the effects of COVID-19