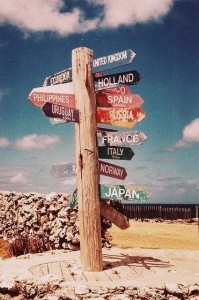 It’s tempting to ignore ethics when you travel. In fact, it’s very easy to do so. When you don’t speak the language, when you don’t understand the cultural nuances, when you’re a stranger in a strange land it’s pretty simple to ignore any nagging doubts about whether you should actually be doing certain things. After all, the rules don’t always count when you’re away from home. You can do whatever you like when no one’s watching.

But the big question is: should you? Should you ignore cultural sensitivities because they’re not your own? Should you stomp all over the planet in the name of having a nice holiday? Some of the following activities are no-brainers: travellers should not being doing these things. Others are harder to argue; there are ethical grey areas that will always attract differing opinions. Some, meanwhile, are a lot of fun. But still, you probably shouldn’t be doing them.

Five years ago this was a standard activity on any tour of South-East Asia. Now, however, word is beginning to spread that riding elephants is not exactly the best idea. See, for any wild animal to be ridden by humans it has to be “broken”, which is not a process many people would be comfortable if they actually saw it taking place. Elephants in captivity are also poorly treated, and travellers are far better off not taking part in the industry that has been created around them.

Clambering all over temples and ruins:

Just because you can, doesn’t mean you should. The temples of Angkor in Cambodia are a case in point: visitors are currently allowed to walk pretty much wherever they want, trampling all over these centuries old ruins. That’s fine if it’s one or two people. But we’re talking millions of visitors a year now, all leaving their mark. Same goes in many other locations, too – castles, temples and ruins around the world. It has to stop, and it might be up to individual travellers to make that happen.

There have been a few great articles around recently about the rise of “voluntourism” – using your holiday to help build a school, or teach kids, or look after animals – and whether it’s actually beneficial. Two excellent things to consider before you sign up for any volunteer work overseas is whether you’d still be doing it if there was no such thing as Facebook and Instagram, and whether you actually possess skills that suit the project (are you qualified as a builder or teacher?). If the answer is no to either of those, and you haven’t thoroughly researched the organisation you’re planning to give your money to for this experience, you probably shouldn’t be doing it.

It’s understandably heart-breaking to say no to a child in need, to refuse to give even a few cents to a kid who looks like he or she hasn’t been fed in days. But travellers who give to child beggars are supporting an industry, encouraging the idea that parents would be better off sending their kids out to guilt tourists into giving them money than to, say, go to school. Poverty is an extremely complex problem, but handing money to children isn’t the solution.

This is such an obvious one that it makes your head hurt just thinking about why some people still insist on clambering all over the big red rock even after they’ve been politely asked by the traditional owners not to. What’s the point? Travel is about respect for the people you’re coming to visit. If you can’t just enjoy the Uluru experience from ground level, maybe you shouldn’t go.

This isn’t a holier-than-thou sermon. At some point, however, and in some countries, you as a visitor probably should consider that drinking to excess is either culturally insensitive, or just plain annoying for the locals to have to put up with. It’s not just a party venue you’re hanging out in – it’s someone’s home.

Maybe you’re a total badass who can haggle a Bangkok tuk-tuk driver out of almost every baht. But you should ask yourself: is that really a good thing? It’s easy to get swept up in the game of the haggle and forget that you’re arguing over what equates to just a few cents. A few cents you probably don’t need.

There are plenty of people who believe that ethical travel means refusing to visit countries whose politics and system of government and human rights records they disagree with, and that’s fine. But to me, that’s punishing the wrong people. When you travel you not only put money into the hands of locals who wouldn’t otherwise have been able to earn it, but, purely by visiting, you also open up those countries to the rest of the world. That is surely important.

Here’s the deal: if you visit an orphanage, or even a school, in a developing country and you bring along presents for the kids, you play games with them, you sing a few songs, you pay your money to someone for the experience, and then you disappear forever, you’re not doing those children any long-term good. You’re pleasing yourself, sure. But you’re also creating an industry that encourages parents to put their kids into orphanages for the gifts, and the long-term effect on the children of these brief brushes with visitors is not positive. If you want to give, by all means do – but research the facility thoroughly, and don’t feel you have to visit in person.

Share
PREVIOUS 7 tips to prepare your children for vaccines